The Havoc Of Choice - an excerpt. 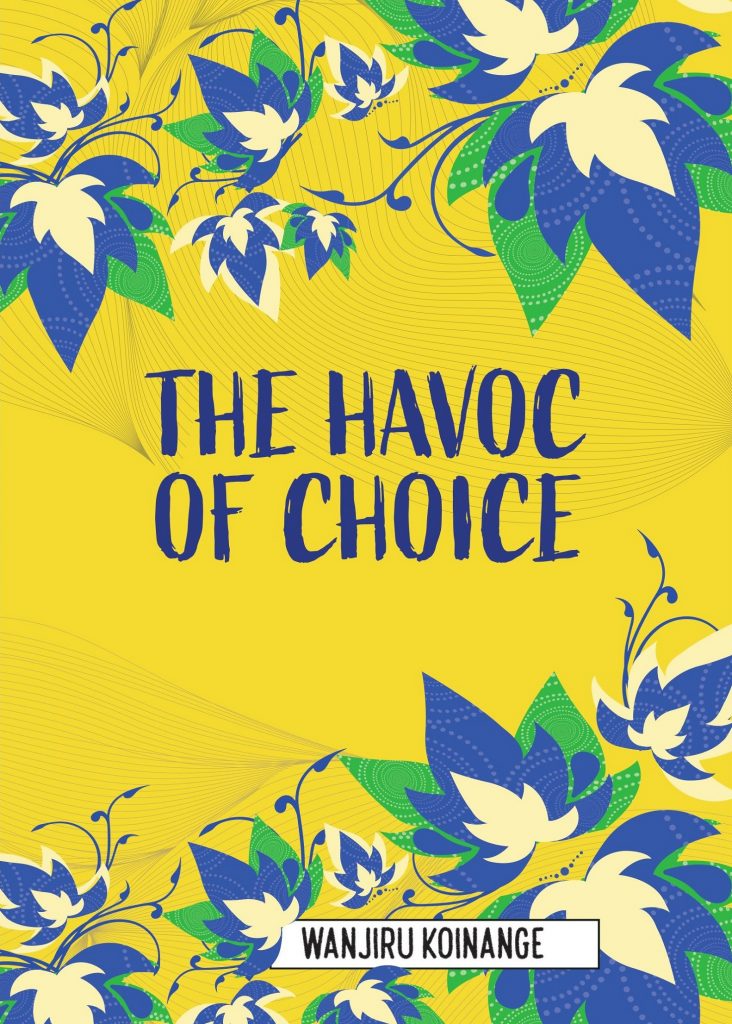 The election that Thuo anticipated would change his life had passed. Just like that. And it had left him behind. For the first time since being brought to the station, Thuo was enraged. The feeling built up inside him, swelling like a mandazi dipped in hot oil. He had been in jail for three nights for no reason at all. The only thing he was guilty of was doing what Kavata had asked him to. His anger coursed through his veins quicker than he could process it. His gaze was fixed on the Kenya Police logo painted on the front of Kiprop’s desk. ‘Utumishi Kwa Wote,’ he read the slogan that declared service to all, over and over. Each time becoming more aware of how untrue those words were. They were as untrue for him as they had been for Kiprop. With muscles tensed and fists clenched, unable to contain his anger any longer, Thuo sprung out of his seat and made to connect his balled fist with the offending logo. The metal links around his left wrist clang loudly, reminding Thuo that he was still cuffed to the bench on which he sat. His wrist snapped. Thuo fell to his knees; his rage was rapidly replaced by excruciating pain.

‘Now you, what are you trying to do? I do you a favour and then you want to attack me?’ Kiprop, his friend, was now gone and replaced by the man the police college trained him to become. He ridiculed Thuo as he writhed on the ground. His wrist was getting swollen so fast that soon, the cuffs constricted it. Kiprop waited for Thuo to calm down before he walked over and slapped a new set of cuffs on to Thuo’s right arm and then dropped a poorly stocked first aid kit by his feet and went back to his seat, turning up the volume on the radio.

‘Hurry up and put a bandage on so you can go back inside,’ Kiprop said.

‘Asante. Lakini I need some help. I can’t tie it with these on.’ Thuo winced through the pain.

‘That sounds like a personal problem,’ Kiprop said. All signs of their new friendship disappeared.

He was joined in his cell by a man called Pato.

Pato was caught trying to vandalise an ATM machine at a nearby petrol station after beating the security guard who was stationed there to a pulp. The man was in a drunken stupor so deep that he didn’t even stir when he was thrown onto the slimy floor of the cell. Thuo never saw anything like it.

A couple of hours later the policewoman on duty hit the door with her rungu. She wanted to speak to one of them. Thuo remained seated, certain that it was not him she was interested in, and signalled to his cellmate to heed the call.

‘What is your name?’

‘No, it is not you I was calling. Call the other one.’ Pato shrunk away from the door, leaving Thuo to take his place.

‘Joseph Thuo Maliti.’ There was silence on the other side of the door as the woman flipped through the pages of the thick book looking for Thuo’s name.

‘When were you brought in?’ she asked when she couldn’t find his name on the register.

‘On Monday. Asubuhi.’ Thuo was now curious. He realized that this was the first time anyone asked him his name. He wondered if it was at all possible that his name was not on the register and what that could mean for him. The woman flipped through the pages in the opposite direction.

‘Are you sure you don’t have other names? Give me your names as they appear on your ID.’

‘Joseph Thuo Maliti.’ Hope filled him faster than the water that now sat in his happy belly.

She started again at the bottom of the page and checked each name carefully, using a wooden ruler to guide her down the page.

‘Who was on duty when you were brought in?’

‘Kiprop.’ The policewoman spun in her seat and looked Thuo straight in the eye.

‘How dare you call him Kiprop as if you are the one who birthed him? Can you have some respect for officers!’

‘Sorry, sorry madam. I was brought in by Bwana OCS and two other afandes but it is Officer Kiprop who was sitting at the desk when I came.’ The policewoman looked through the massive log one last time, and then slammed it shut and reached for a newspaper. Thuo was still watching her several minutes later, his breath caught in his throat.

‘Who has said that there is a problem? Stop looking for trouble.’ Her voice vibrated through the room and Thuo stepped away from the door. His name was not on the booking log, of this he was certain. He was not supposed to be locked up. It hurt him that nobody cared.

At six pm, Kiprop strolled back into the station for his shift, beaming from a day off. Thuo confirmed his suspicions when he overhead the policewoman ask Kiprop about him. They spoke in their shared mother tongue and from his position just next to the peephole Thuo could only make out the mention of the OCS. Whatever Kiprop said didn’t seem to satisfy the policewoman’s curiosity, but her shift ended and she decided that this was no longer her problem. Before long Kiprop was back in his seat, and the familiar sound of the static-filled radio transmission re-entered the room.

‘Ala, they’ve locked you up without any charges?’ Pato lay on his back on the bench opposite him.

‘Is that what they said?’

‘Yes! You didn’t hear? Oh, you are a Kikuyu.’ Pato raised his head slightly, lifting the arm that was shielding his eyes to look at Thuo, then replacing it and laying back down. ‘You don’t look like one.’

‘What did they say?’ Thuo wanted to shake the information out of this galling man.

‘They said that when the OCS brought you in they couldn’t charge you so he told that Kiprop guy to lock you up until he decided what to do with you. But then the OCS got caught up in the election and only returned to the station yesterday. So Kiprop didn’t write your name in the register. He is waiting to hear what the boss says.’ Pato looked amused as he spoke. Thuo was stunned.

‘Ati how long have you been in here?’ Pato sat up.

‘Since Monday.’ Pato shot up to his feet and looked at Thuo in disbelief.

‘Ati Monday! Haiya so you didn’t vote? You were in here the whole time?’ Pato laughed hard, mocking Thuo for his stupidity. It took Thuo every speck of restraint to keep himself from showering his cellmate with curses and blows.

‘Is this your first time inside?’ When Thuo nodded in response, Pato looked at him as if having never being on the wrong side of the law was an indication that he was a lesser man.

‘You don’t know the katiba? Don’t you know that they are not allowed to hold you during elections? You should have asked for bond. You would have been released and because there were no charges you would have been a free man. No court – nothing! But you stayed here, heh! You are really a fool.’

Thuo could not process the information that he received in animated bursts. Pato was looking at Thuo as if it were Thuo, not Pato himself, who was insane.

‘Let me tell you about this police system. You have to know the tricks of it. I was in Gigiri Police the Friday before the election, but we were released on bond – only a thousand bob – and given court dates for next year. But, the courts will obviously be too busy dealing with rigging cases after the election to think about our small cases. So me, I am not going. You can get away with anything in this country over elections – even lusting over your mkubwa’s wife.’

Pato paused and watched to see if he struck a nerve, but Thuo was stunned into silence. It is only later when Thuo re-capped the conversation that he realized that his cell mate must have heard from Kiprop that Thuo was allegedly having an affair with a big man’s wife.

‘If you are ever arrested, you must act like you are a mad man, or say that you are very sick, vomit and shit everywhere and make noise. Say you are dying or that you are possessed by demons. They don’t like noisemakers, so they get rid of them quickly. The quiet ones, like you, you can rot here forever. Hehe! Monday! Yaani you missed the election. Heh! It was a hot one.’ Pato continued rambling but Thuo’s mind was still processing the things he just heard.

Thuo stood up and began to call out for Kiprop, banging frantically on the door, and pressing his lips against the filthy peephole as if it would make his cries louder.

‘Shut up! They are announcing the results!’ Kiprop turned the radio to its highest volume and placed it on the corner of his desk closest to the cell. A few of the other officers at the station gathered around the desk. Suddenly, nothing else mattered and Thuo was swept up in the anticipation that engulfed the room, as if the outcome of this election would in some way change his current situation.

The chairman of the electoral commission was speaking frantically, his voice heavy with nerves. There were delays in releasing the results. The radio station reporter described the atmosphere as tense, but he didn’t have to. It was clear even inside Thuo’s cell that the nation was no longer at ease. When the chairman announced the name of the winning presidential candidate, there was a silence that lasted a few moments as Kenyans, who were mostly surprised by the results, processed the news.

Then followed an explosion of reactions.